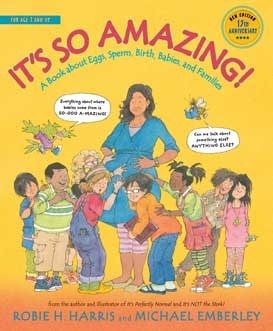 This newest edition IT’S SO AMAZING! now includes the most up-to-date information and answers to the questions that today’s kids ask and/or wonder about—such as about how babies are made and born, and how our bodies and even our families are the same and different. Click here for more information about the changes in this newest edition:Download the Anniversary information sheet

This book was created in response to requests from parents, educators, librarians, health professionals and clergy for a book on sexual health for younger children, ages 7 and up.

I immediately went to all the experts I had gone to when creating IT’S PERFECTLY NORMAL. I asked them what should be in a book on sexual health for these younger children ages 7 and up. When I visited schools and talked with school age kids, ages 10 to 14 or so, I asked them the same question. And they said to me, “Almost everything that’s in IT’S PERFECTLY NORMAL, but not all the details, and less about puberty and more about babies and how they are made. And kids that age, even though their parents and teachers don’t think so, they do wonder and want to know about sex.” That’s when I realized that this book would have to talk about sex — not through the lens of puberty as in IT’S PERFECTLY NORMAL — but through the lens of where babies come from. I also understood that kids this age are very interested in science and how things work and that would be a way to talk about how babies are made.

I realized that this book could not and would not work as a “shorter/cut-up/slimmed-down version” of IT’S PERFECTLY NORMAL. This book would have to stand on its own. Michael Emberley had been very interested in using a comic-strip format for kids’ books, and actually did use that technique in some places in IT’S PEFECTLY NORMAL. I also realized that since many beginning or emerging readers would be reading this book, we would have to make the text shorter. We spoke with a reading expert who said that boxing the text would make it seem less dense and would really appeal to younger readers, which is exactly what Michael had said. And Michael’s use of comic-strip format in many places in this book is one reason I believe the book is so accessible to younger children.

The biggest challenge in this book was to include almost everything that was in IT’S PERFECTLY NORMAL by writing in a way that would be comfortable for kids ages 7 and up and would be age-appropriate. That’s why this book took almost three years to create. It was also a challenge to write a book for younger children on most of the same topics I had written about for older children. What was difficult was deciding what and how much information to include. I did have fun writing the words of the BIRD and BEE cartoon characters that had appeared in IT’S PERFECTLY NORMAL as the voices of children. But of course, the BIRD and BEE characters had to talk in a younger manner. In order to fit in all the art and all of my writing information and all the BIRD and BEE cartoons, we decided to make the book 84 pages long. We did not worry about the length because we felt that some kids would only look at the parts of the book they were interested in, while others would read through the whole book. Teachers and parents have told us that’s just how kids use this book. 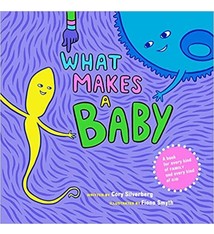 What Mackes a Baby? by Cory Silverberg (3+)